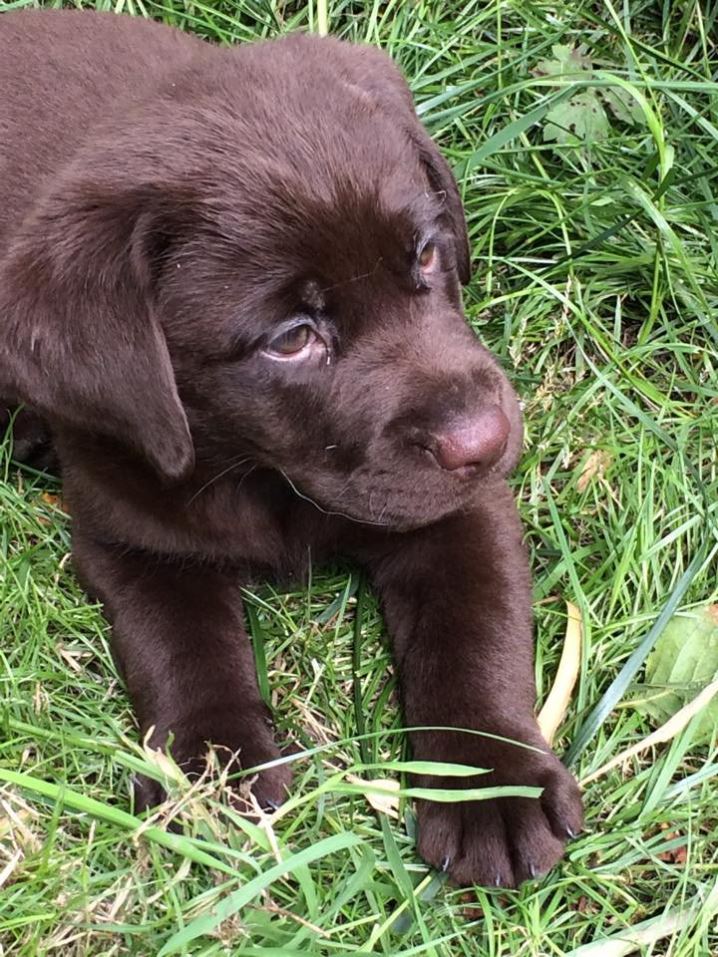 Max was just weeks old when he was involved in a terrible accident. He suffered multiple jaw fractures and had to be rushed from his owner’s Vet in Swansea to see our Specialist Veterinary Dentist, Peter Southerden. Max’s injuries were severe and he required all of Pete’s expertise to repair the fractures.

From Swansea to Swindon - Max's Story - written by Rosemary his owner

We bought our lovely Chocolate Labrador Max, as companion for Bailey our 5 years old cream Labrador. We had recently had recently lost our 14 year old Lab. My daughter had come to look after the dogs and my grandchildren while I was at work.  I had only been at work for an hour or so when I received a panicked call from her. She told me that Bailey had attacked Max and that he was hurt. My heart sank, I couldn’t believe it, Bailey was so docile. I rushed home to find my daughter holding Max in her arms with blood all over her, I felt so awful. How could this happen?

I phoned my vet in Swansea telling them that I was on way down.  Max’s jaw was out of place, my vet took Max and him pain killers straight away. They then took him in to take X-Rays etc.

A couple of hours later the vets called to say that Max's jaw was broken. They had done what they could but Max was in a bad way and they needed to refer him to Eastcott Vets in Swindon. There was a specialist vet dentist there called Pete who could try and help.

We drove for two and half hours with Max, he was sedated in a pet carrier but he was still crying. That journey seemed like a twelve hour one, between I couldn't stop crying myself, just worried nothing could be done to this poor pup.

When I arrived at around 9 pm that night, we were met by lovely staff and the vet, Pete. Pete explained everything to us in such a simple and understanding way. That made us feel more confident that Max had a chance, but on the other hand advised us of the risks, and assured us he would do his very best. We knew this could go both ways ... We said our goodbye to Max which was so hard, this poor puppy had only been in our home for a week and now we were having to leave him. I was also afraid he would not remember us, as he hadn't had much time get used to us. It was so to leave Max but knew now he was in safe hands. Pete said to us that he would update us every day, and I must say he was true to his word.  We travelled back to Swansea, crying all the way, I wanted to be with him.

The next day Pete phoned saying that X-rays and scans had been done and that it didn’t look good but he try his very best.

“Max had a right mid body mandibular fracture and left caudal mandibular body fractures at 8 weeks old.The fractures were unstable and because of his age I couldn’t use internal rigid fixation, so the technique I used was Maxillo-Mandibular Fixation using dental acrylic (bonding his canine teeth together in correct occlusion)”. – In Layman’s terms, Pete had to ‘glue’ Max’s teeth together once the jaw fractures had been aligned in the correct position." ..Peter Southerden Max's vet 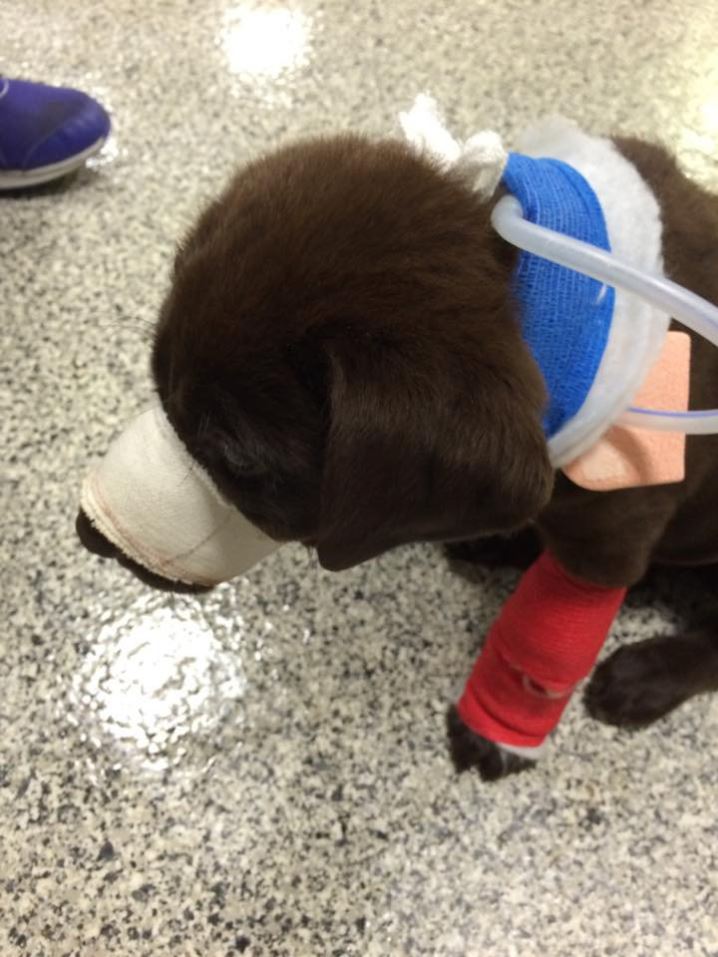 They had operated on Max and done what they had to do but Max was not out of the woods as Pete explained. I phoned up every day, staff at reception were very helpful. Some days Max was OK, other days not good at all. We thought ‘this doesn’t sound good’. Max had feeding tube etc and there were a few complications as his throat was swelling.  He was put on steroids. I just wanted Max back!

"due to the severity of Max’s injuries and his very young age; he required round the clock intensive care. His mouth was bandaged almost fully closed and Max needed reassurance, specialist feeding and TLC that involved just about every member of staff." Eastcottt Vets' Nursing team

I went to see Max at end of that first week ... oh boy that was so hard again. When I saw him I just wanted take him. But also he was getting spoiled there with all the lovely staff ... Max was very well looked after.

Whilst Max was in the hospital we collected Max's brother Ben! I really wanted a pup from same litter.

The day finally came when I could bring him home. Max had shown no sign of teeth marks on him when he was injured so we don't know it happened between him and Bailey, it had happened so fast. It was very hard to keep Max away from him; I didn't want anything to happen. For months we watched and watched, Max got stronger and stronger. It was so hard watching Max lapping food as that's all he could have was liquid food. We were back and forth to Swindon and Max loved the drive but he wouldn’t go anywhere without his brother! 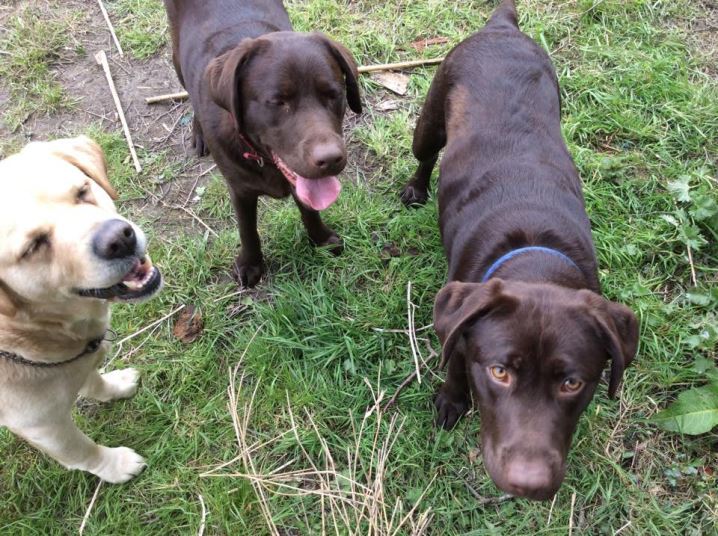 Finally, Max went back up to Swindon and had his plaster taken off. He was wild but wouldn’t have it any other way!

The last time I took him for check up, Pete found a small problem with the way his teeth were growing and had to remove a couple of teeth.

Max is now fit, well and healthy I'm glad to say. He goes back in to Eastcott in September for I think his last check which will be sad to say as what wonderful people they are at Eastcott Vets. I just can't thank you enough, especially Pete who worked very hard on Max. Max is now nearly a year old and he and Bailey get on just fine it's like as if nothing has happened!

It has been a long journey for Max and Rosemary in more ways than one! Max was a joy to treat and we were grateful for Rosemary’s support and trust in us. Thank you for the goodies too, they went down very well - the Eastcott Vets Team.

If you would like to read more about Peter Southerden, BVSc MBA DipEVDC MRCVS RCVS Recognised and European Specialist in Veterinary Dentistry, you can read his Blogs here(beware of graphic images!) 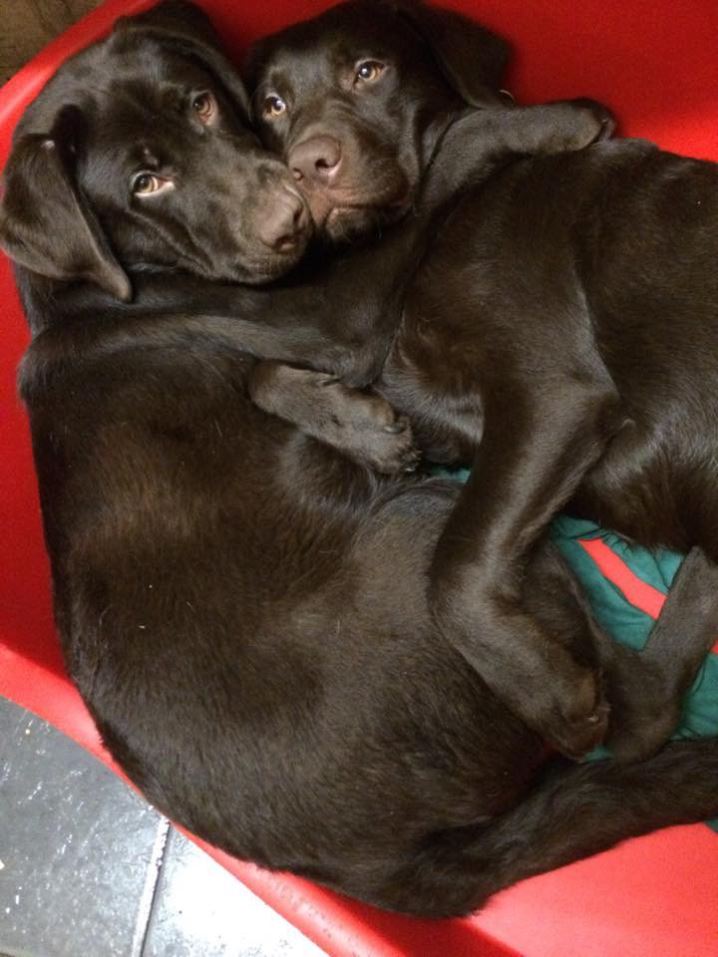