The Tale of SImon

The Tale of Simon

Simon owes his life to a kind member of the public who bought him in after being hit by a car! He was in a critical condition on arrival and after receiving vital veterinary care it became clear that Simon had suffered major injuries. He had extensive damage to his right eye, a painful and complicated fracture to his left canine tooth and a fracture involving the hard palate in his mouth. Eastcott Vets & nursing team fought hard to stabilise him and make him feel as comfortable as possible. Simon, despite all he had been through was a very affectionate and loving chap always keen for a cuddle! But no matter how much fuss he received he would not eat due to the injuries he had sustained.

Once Simon was stable we were able to begin fixing his injuries. Unfortunately it became clear that vision had been permanently lost from Simon’s right eye. The eye was very swollen and likely to be causing Simon pain, so the decision was made to remove his eye.After removal of his damaged eye, repair of his hard palate and removal of his fractured tooth, our fingers were crossed to see if he would begin to eat again. Within one hour of recovering from his anaesthetic he gobbled down all of his supper & was asking for more! 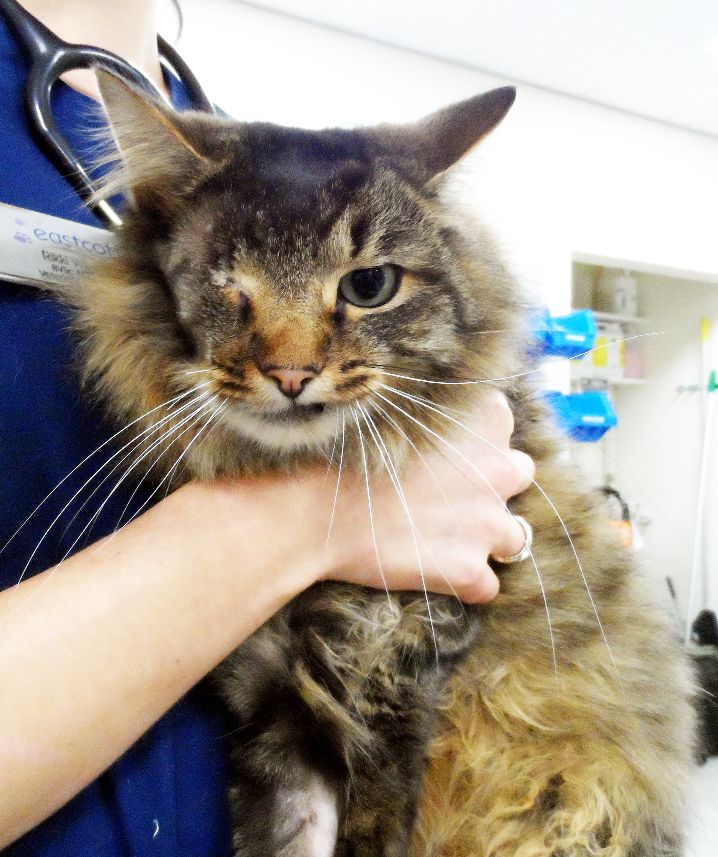 Unfortunately Simon had no microchip and no one came forward to claim him. However Simon had won the hearts of many of the staff at Eastcott vets and one of our vets decided to give him the loving home he so rightly deserved.

Simon I’m sure would like to say a big thank you to the member of the public who showed the initiative to call us for help. We hope that from this story we can continue to encourage the benefit of microchipping your pets so that pet and owner can be reunited whenever possible.